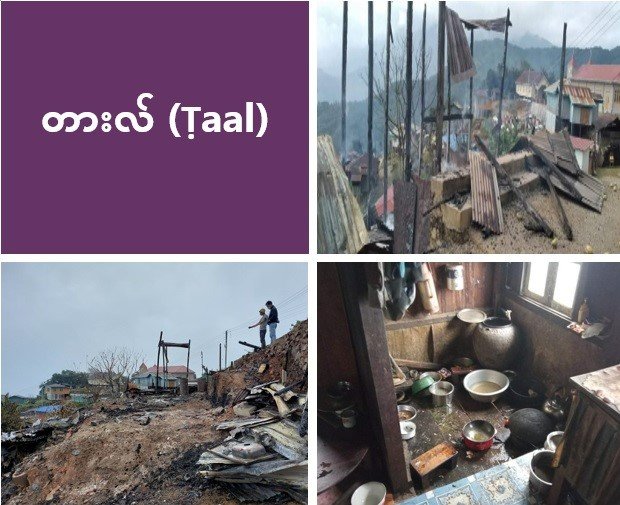 Ṭaal village is located in Falam Township.  It is situated in Taal Village Tract and has 36 houses with a total population of about 150 to 160 people.  It is located on Falam-Hakha Road, 14 miles from Falam and about 28 miles from Hakha.

First incursion by the SAC troops

On July 20-22, the military council invaded Ṭaal village. More than 90 troops stormed the village, firing indiscriminately and looting 21 houses. Items in the households such as 50 domestic chickens; a TV; 4 mobile phones, blankets, rice, and food such as oil were stolen. In addition, the clothes in the house as well as many pieces of furniture were also destroyed. The value of the property stolen and destroyed by the military council amounts to nearly 15 million kyats.

The villagers have fled into the nearby forest and in the mountains for four nights and were only able to return to the village on the morning of July 24. However, due to the dangerous situation, approximately only 30 villagers were left to manage the situation and take care of the village. They fled to Mangkheng village, and during the travels, some were infected with Covid-19.

Second incursion by the SAC troops

The military council invaded Ṭaal village for the second time since August 9.  There were about 150 troops stationed in schools and the Ṭaal Baptist Church for five days.  During their encampment, all homes in Ṭaal village were ransacked; 36 houses were burglarized and about 380 domestic chickens and eight pigs were captured and killed.  The decomposed body of the animals was also dumped inside homes, and furniture; accessories, and food were destroyed and stolen.  While encamped at the church, the military council destroyed the Bible, Hymns, Church seats, and valuable religious items.

About 30 villagers who were left to guard the village during the first invasion of the junta military fled into the jungle after the second invasion.

On 15 August, two villagers, U Sui Cung (43) and Peter Van Thawng Hu (22), were arrested by the military council on their way to survey the situation in the village and to bring some supplies.  The two were taken to a farm in the village of Ramthlo and beaten.  They were released on August 16.

Third incursion by the SAC troops

The military council troops are stationed in Operation Anawrahta in Sagaing Division, prepared for offensive action against Magway Division and Chin State.  Since October, there has been a massive attack in Chin State.

On October 17, the military council troops entered Chin village and encamped for three days.  During their encampment, four houses were set on fire and three were destroyed by artillery fire.  Accessories from 6 houses; motorcycle, Pets; pots and pans were stolen.

Fouth incursion by the SAC troops

About 50 military vehicles returned to Falam from Hakha town on October 23 and stormed Ṭaal village once again.  On the morning of October 24th, eleven houses were set on fire, eight of which were completely destroyed and burned to the ground.  Thirty-four houses were burglarized and insults of threats on the entire village were written on the walls.

In October, the damage caused by the invasion and destruction by the military council was over 1.283 million Myanmar kyats.

The village of Ṭaal, which has only about 36 houses, were targeted four times by the military council, and the atrocities committed resulted in the near destruction of the entire village. Currently, only five villagers are left to take care of the village, while the rest have fled.  Some have taken refuge in villages near Falam, while others are still fleeing in the forest.

It is clear that the military junta’s acts of violence against Ṭaal village violate international law, including domestic law.  Systematic attacks targeting civilians, and heavy artillery shelling inside civilian homes make it evidently clear that crimes against humanity, such as arson, are widespread.