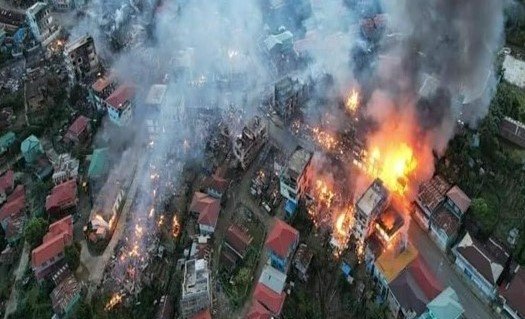 At around 8 am, while more than 50 military vehicles from Gangaw were heading towards Kalaymyo, the SAC troops fired heavy artillery shells which exploded inside the compound of ​​Chaung Khua Baptist Church on the Kalay-Gangaw road.

In Thayar Gone village on Kalay-Gangaw Road, four houses, including a motorcycle repair shop, were set on fire by the military council troops.  U San Thang(40) and two villagers were threatened and arrested. One villager was shot in the leg by their gunfire. They also stole two motorcycles.

More than 20 military vehicles, including two tanks were traveling towards Tedim. When they reached Heizin village on the Kalay-Tedim road, they fired multiple rounds in the village to intimidate, and then stole or took by force food items, household goods, mobile phones, and domestic pigs and chicken.

In Thaingin village, they broke into the house of an 85-year-old woman and stole cash from Church donation box.

The military council troops in 50 military vehicles arrived in Lumbang village in Falam township.  They spent the night at the high school and the village tract hospital. They took television, rice, cooking oil and other items from a restaurant in Lumbang village.  In addition, one motorcycle from the construction office; 1 liter of diesel and home computer; cash donation for a local Church, some accessories, domestic chicken and pigs were taken by force.

The bodies of two Tuphei villagers, 29-year-old Thawng Lun Mang and 34-year-old Thawng Nei Mawi, were found on the side of the road near Pine Camp (ထင်းရှုးစခန်း) in Falam township.. They both were hit and killed on October 11, by bullets from the military council troops who were traveling from Kalaymyo.

In Rialti village, Falam Township, about 11 houses, including a Baptist church building and a warehouse, were set on fire by the military council.  Rialti was a village with a total of 11 houses and a population of 43.  Almost the entire village was destroyed by the military council troops.  The value of the loss was estimated at over 471.2 million Myanmar Kyats.

On 14 October, 14 houses, including the Church pastor’s house, were set on fire by the military council troops in the new village of Thlanrawn which had about 30 houses.  In addition, about 10 houses were destroyed by the military council until they were uninhabitable.  The total value of the damage was estimated at over 131.1 million Myanmar Kyats.

The military council troops camped in Taal village from October 17 until 19, and on October 18, they torched four houses in the village. In addition, the troops fired RPG at three houses which were totally destroyed. Moreover, household items, motorcycle, domestic animals, pots, and pans were either stolen or killed from six houses in the village.

2.Three houses in Thlanrawn village were set on fire by the Military council troops. The property lost value was estimated at over 18.9 million Myanmar Kyats.

The military vehicle coming from Falam to Kalay stopped at Tuphei village in Falam township. The junta troops killed domestic chickens and pigs in the village.

The military council troops entered Thlantlang for the second time, firing heavy artillery shells and setting fire to more than 164 houses, including CB Bank building. The Church on the Rock (COTR) building, and the Presbyterian Church building were also involved in the blaze.

Almost all residents of Thlantlang had fled the city due to massive fires on September 18 and clashes between the junta troops and Chin resistance forces.  At this time, the military council troops led by Lt. Col. Thaung Hlaing from LIB 269, was stationed in Thantlang.