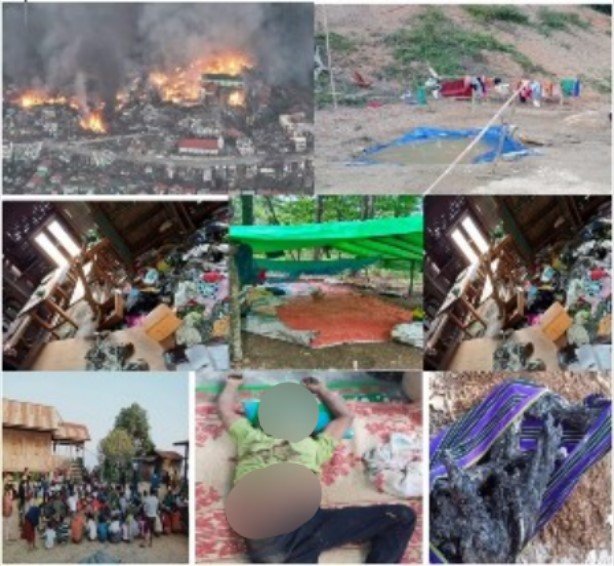 February 1, 2022, marked the first anniversary of the military coup d’état in Myanmar, which brought the State Administrative Council (SAC) to power.

Myanmar’s military had carried out crimes and atrocities, crimes against humanity, and gross human rights abuses against the country’s ethnic minorities for decades under previous military rule. Since the coup of February 1, 2021, it is evident that the SAC troops have been openly committing similar crimes and gross human rights abuses not only in Chin State, but across Myanmar, using similar tactics of previous rulers.

As of February 12, 2022, the Chin death toll from the violent crackdown carried out by Myanmar’s junta since the unlawful military coup has risen to 202. The list includes 109 civilians and 93 members of Chin revolutionary groups. The civilian victims include 18 women, 16 children (aged under 18) and 4 Christian ministers. Causes of these civilian deaths include:

The bodies of 8 civilians arrested and killed by SAC troops were not recovered.

The military junta has enacted unjust laws to maintain its power and to restrict the basic human rights of the people. Nearly 800 Chins were unlawfully detained and arrested within a year of the military coup. The military council applied provisions from various laws to charge many of these detainees. Laws such as the Natural Disaster Management Law, the Anti-Terrorism Law, the Ward and Tract Administration Law, the Peaceful Assembly and Peaceful Procession Law, and the Penal Code were used to charge and sentence many Chins. A significant number of Chins were arrested without reasonable grounds. The SAC troops also carried out unlawful mass arrests with the intention of using them as human shields.

Re-arrests after cases dismissed by court

On May 28, 2021, four Chin youths (Ko Aih Tun Min, Ko Tun Min (1), Ko Tun Min (2) and Ko Aung Tun Soe) were arrested and charged under Section 505 (a) of the Penal Code in connection with a bomb blast in Paletwa, Chin State. Nearly five months later, they were released on October 13, 2021, after the court dismissed their cases due to lack of evidence. However, on the following morning, they were arrested again by Paletwa Township police for “questioning”.

The SAC troops often committed sexual assaults, including rape, during their operations.

Section 5: Use of people as human shields

Since the beginning of its operations in Chin State, the military junta forcibly recruited civilians as guides, took them as hostages, and used them as human shields. In total, 53 innocent Chin civilians were captured as human shields and, of these civilians, 10 were tortured to death by the SAC troops.

During ongoing clashes in Chin State, the military council made extensive use of its “four-cuts” strategy. (Myanmar military’s “four-cuts” strategy aims to cut off insurgents from funding, food, information, and recruits.) In Chin State, SAC troops stormed villages along the road and destroyed homes, committed burglary, wrote insulting, expletive and threatening messages on the walls of the houses, fired heavy artillery at the villages, and destroyed Chin cultural artifacts. In Falam Township alone, about 20 villages were violently invaded by SAC troops and many houses were burglarized.

In addition to firing artillery shells at villages and homes, SAC troops intentionally burned down many buildings in Chin State. A total of 1,043 structures, including churches and public buildings, were torched by SAC troops. The entirety of Rialti village in Falam Township was burnt down and nearly half of Thantlang town was razed to the ground.

Fighting in Chin State and Kalaymyo Township in Sagaing Region, and SAC troops’ violent attacks on civilians, forced many Chins to flee their homes and villages. More than 70,000 Chin people were forced to flee their homes in Chin State and Kalaymyo Township, Sagaing Region. An additional 35,000 Chins fled to Mizoram and Manipur in northeastern India.

The Myanmar military junta unlawfully took control of the homes of Chin civilians and elected representatives, sealing and confiscating them without court orders or proceedings. The junta also threatened to seize the properties of displaced civilians if they did not return to their homes. In Chin State and Kalaymyo Township in Sagaing Region, the houses of five elected representatives and one Christian minister were illegally confiscated under Section 56 of the Anti-Terrorism Law.

As revealed by the documented evidence, the inhumane actions of the SAC troops towards the Chin people, and others in Myanmar, violate the international humanitarian law and international human rights law. The United Nations Investigative Mechanism for Myanmar and the Special Rapporteur on the situation of human rights in Myanmar have also stated that the circumstances and patterns of abuse committed by SAC troops amount to crime against humanity. The failure of international community, specifically the United Nations Security Council to hold them accountable for their actions has emboldened them to continue committing grave human rights violations across Myanmar.

It is time for the United Nations, the Association for Southeast Asian Nations (ASEAN) and international community to take meaningful steps to end this impunity. The United Nations must authorize a No-fly zone to save lives by stopping the military junta from increasing the use of indiscriminate airstrike on civilians. The international community must take more active role to protect civilians and exert more pressure on the military junta to ensure it ceases its onslaught against the Chin people and others in Myanmar.

To have peace and stability not only in Chin State, but throughout the country of Myanmar, the Military junta need to cease all its military operations against the population, release all political prisoners and handover the country to elected civilian government. There should then be all inclusive peace conference and a new constitution of the country need to be written to establish a democratic federal union that guarantees freedom, equality, and self-determination.